Efficient 5x5s for The Intermediate

I’m No Longer a Novice, Now What?

For the novice lifter, I think the latter is the most effective use of time in the gym. Three sets of five while increasing the load each workout is unbelievably effective for the new trainee. So much so, I recommend nothing else for the untrained lifter.

However, all good things come to an end and the stronger you become, the more complexity you will need in your program to get stronger (although not much).

One of the main reasons the program begins to stall is that your body simply cannot handle the stress of three heavy sets of five three days a week. For most people it simply becomes too heavy and your body cannot adapt fast enough.

So where do you go from here? Do you buy a template? Run 5/3/1? Join Crossfit? The Nebraska Method? The Texas Method? The answer to all of those possibilities is “maybe.”

Depending on your goals, how much time you want to spend in the gym, and how focused you are in your training are going to determine what program you end up doing.

For now, I am going to assume that your general view on fitness is similar to mine. Or maybe have a similar worldview as I do. You love chili, country ham, Made in USA Iron, and the 4th of July… whoops I got sidetracked there :).

I am going to assume your training goals are similar to mine. There, that’s better!

So, before I lay out a program for the intermediate trainee, let’s go over the goals for training:

You are probably summarizing this in your head and sarcastically saying to yourself, “Okay Grant, you want to be stronger than ever, lean, and spend no time in the gym?!”

And the answer is “Yes. That’s exactly what I want!

Reaching these goals comes with sacrifice, however.

For example, every workout will be VERY HARD both physically and mentally.  And, you only get to prioritize one or two lifts at a time.

All of these classic weight training programs are named after states:  Texas Method, Nebraska Method, Ohio Method,  and the corresponding photos for each of these methods are usually of a giant powerlifter who hails from the aforementioned state. This one is different.

This is a squat program that Coach Mike Minigell and I developed and fell into almost by accident to achieve the goals listed above – goals we knew we wanted. Mike is from Maine, and I am from South Carolina. We met and coached together in Southern California… so here you have it.

This is the NorthEast South California Method.

This is the basis of the program. The foundation. Whenever I tweet or post on social media platforms that I completed 5×5 squats in a given workout, everyone always replies with a question:  “Texas Method?!”

No.  This is not the Texas Method.

The Texas Method is a fine program.  I just have one major problem with it: most people do not have that kind of time.

It works, that’s for sure – when the stars are aligned, you sleep 8-10 hours a night, never deal with stress, and don’t work for a living.

But for most people, the time or desire to spend 2-3 hours in the gym a few days a week simply is not there.

With that said, the greatest element of that program is the 5×5 squat. When I 5×5 squat, everything goes up: my squat, my deadlift, and shoot, even my gas mileage. So day one of this program is 5x5s.

The second element is “intensity” which is the load on the bar relative to your 1RM. REALLY HEAVY. REALLY HARD. REALLY SCARY. The kind of reps where you step out of the rack and have second thoughts on your life decisions.

If you’ve been there, you know what I’m talking about. Week one will be a very heavy set of 5 but will quickly turn into triples, doubles and then singles as the weeks go on – using some of Andy Baker’s principles of “Running it Out.”

The Power Of 8s The last element of the program is sets of eight. Eight reps?! Yes!  The bad news is you have to do two sets of them and it’s very taxing.

But the main reason I like eights is for the mental benefit. On a heavy 5×5 day that first rep of the first set can make lifters go internal. All they start to think about is how many reps they have before the workout is over. Completing some heavy sets of eight after a top set of the week can provide a huge mental breakthrough for the lifter.

Here’s what your squat work looks like on a M/W/F split. 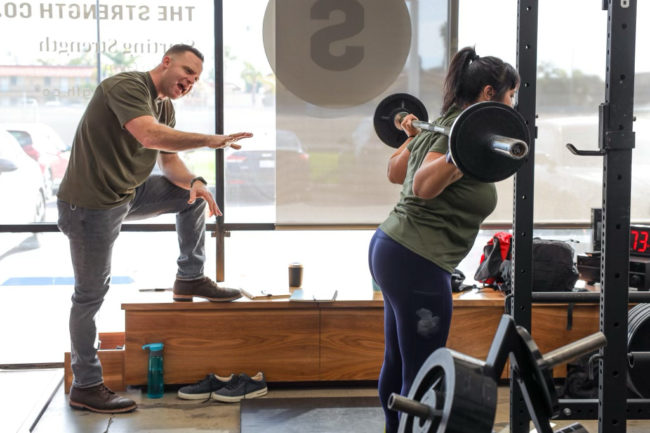 While the first workout starts with 5×5, we’re going to figure out where you should begin based on what you are going to do on Friday. Week 1 will start with one set of five on Friday. This weight should be heavy and challenging but not so heavy that you are worrying about missing it. Pick a weight that you could probably do for 6-7 reps. If you want a percentage, it’s probably somewhere around 85% of your 1RM, maybe a little more.

You may need to massage the numbers a little bit week one, but this should be a pretty good starting point. From here you simply add 5 to everything week to week and run this for as long as possible. After 3-4 weeks you may find that you need to start “running out” your intensity day, switching that top set of 5 to either two triples, three doubles or eventually five hard reps (maybe all singles).

Again, this is just an example, you might be able to keep sets of five longer, or shorter. Or you might respond really well to triples. And hey, you might do triples one week and find yourself the next week able to go back to a set of five. You will have to use some judgment. However, THIS SHOULD BE VERY HARD! Do not wimp out and “run it out” too soon. Push your limits.

How Long Will It Work?

If you are getting some decent rest (doesn’t have to be perfect), hitting your protein goals, and overall managing your recovery, this program should run for a good 8-12 weeks. Push the 5×5 day and as long as that’s moving, your intensity day will go up.

I don’t like to spend a lot of time in the gym, but on weeks 8-10 on your 5×5 day, you’re probably looking at 7-8 min rest between heavy sets.  Then towards the end of the program you might have to do a slight backoff inside the 5×5.

Again, you need to push the 5×5 day hard! But at the same time, you need to get all 25 reps and they need to be very hard, so if some back offs are needed, then implement them.

What About Everything Else? 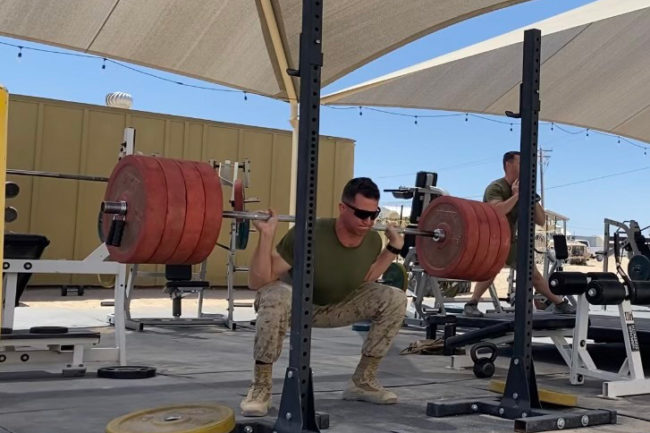 Before we talk about where to put in your other lifts remember that this program has one major goal: To Hit A PR on Your Squat!… (and maybe your deadlift along the way).

Also remember, that we are prioritizing the squat for this entire program. We’ll do the other lifts, but the priority is the squat.

I like to deadlift on the middle day (with no squats) using a top set or (or two) followed by a back off set (or two). Don’t wreck yourself week one by pulling a limit of 5RM on the middle day, but at the same time do something challenging.

From there you’ll progress week to week and “run it out” if needed. I like a backoff with a 10% reduction after your top set. So your first four weeks might look something like this:

What about my arms??? Remember that we are trying to be efficient in the gym and that we are also prioritizing our squats. So we’re not going to spend a whole bunch of time pressing and benching but we are going to do enough so that we don’t lose any strength during the program.

We’re going to add in presses and bench presses with the goal that each workout takes about 60-70 minutes in total. On day one of the week, you will do your intensity pressing (press or bench) before your 5×5 squats so that you are not so gassed that you cannot complete them.

We’ll alternate between press and bench press each week so you’ll have more exposure to one some weeks than the other (similar to when you were a novice lifter). Don’t geek out on setting this up.

It should be hard, challenging, and very easy to keep track of. I’m not giving you percentages  if you start week one too light then take a bigger jump the next week. Vice versa. And do not be afraid to run it out… Your intensity day should follow my fifteen hard reps rule.

So there you have it. The NorthEast South California Method. It’s hard. It works. It doesn’t require hours upon hours in the gym. It does require effort. It also requires a mindset change.

Because people always need to be told many times, if you’re a novice, this program isn’t for you. But if you are an actual intermediate lifter then it is, and you need to embrace the reality that you will not PR all of your lifts each workout or even in a given program.

This one is set up to hit a squat PR. Run it! Let me know how it goes.